Stephen Colbert makes it clear: When you encounter a Lord of the Rings fan, you know it. The series etches so deeply into the hearts of fans that it becomes a part of their identity, even informing their daily decisions. Amidst the battles, giant spiders, and Legolas’ defying the laws of physics, there is a wealth of philosophical life lessons that fans take from the series.

1. Care for the Environment

Tolkien instills a love for nature in his audience by giving personality to the forests of Middle Earth. When the first thing you think of when you see a tree is a marching Ent, support for the preservation of natural landscapes comes easily.

2. The Danger of Greed

The Ring of Power has been theorized as a symbol for many things, but there is no doubt that its true malice is rooted in greed. This is made clear by a word that is most often used by ring-bearers, “mine.” Even Gandalf and Galadriel, the wisest and strongest forces of good, know that just holding the Ring is too great a temptation to risk, especially for those who are already powerful.

The most beautiful message of the series ends up coming from one of its most hideous creatures. Despite his plotting to take back “his” Ring and kill all in his path, without Gollum the Ring might never have fallen back into Mount Doom. It is what Gandalf calls “pity” that keeps both Bilbo and Frodo from killing Gollum, and that pity saves the entire world.

In the real world, fans may think twice before cutting a friend out of their life, even one who has hurt them. You never know what good they may bring you in the end. 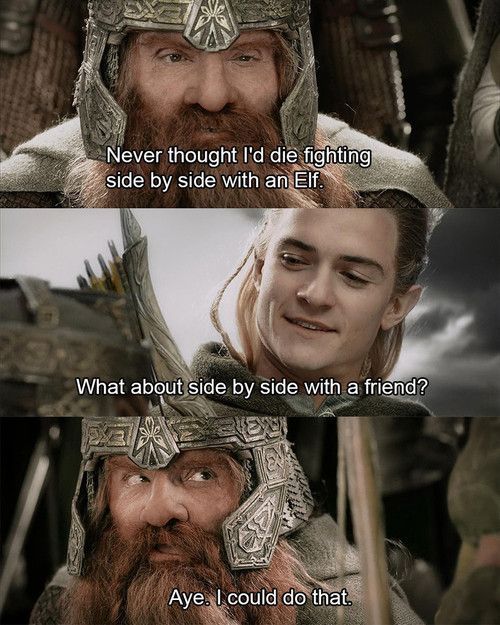 Even Middle Earth suffers from the dividing force of prejudice, but Tolkien shows that despite the strongest hatred, there is still hope. Though Dwarves and Elves harbor an age-old distrust and abhorrence for each other, Gimli and Legolas walk away as the two best friends of the story.

Through fighting side-by-side to destroy the Ring, Gimli and Legolas become a model for people of different backgrounds, showing that any two cultures can unite in friendship.

A Hobbit is the probably most unlikely creature in all of Middle Earth to save it from destruction. This message comes quite plainly to fans: If two Hobbits can take the Ring from the Shire to Mordor (in their bare feet), what can’t we do?