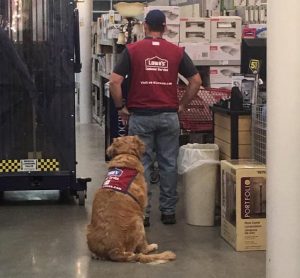 Veteran and His Service Dog Find Job Together

It’s hard enough to get a job, but how about getting one for your dog too? After serving in the Air Force, Clay Luthy wanted to find work but didn’t want to leave his service dog, Charlotte, behind. Thankfully, Lowe’s in Abilene, Texas, had a job opening and happily accepted both Clay and Charlotte. The duo has since become an internet sensation, receiving more than 1,000 comments on a picture of them at work. Nothing makes work better than working with your best friend. Read more.

Starting in 2017, Google will power all of their data centers and offices with renewable energy alone. The big switch means that their offices will go from using 40% clean energy, as they do now, to using 100% clean energy, mostly drawn from wind farms and solar panels. With this new energy initiative, Google will save money in addition to being environmentally conscious. Google owns eight other large businesses including Youtube and Gmail, and together they used 5.7 terawatts of energy last year, which is about the same amount of energy used by the entire city of San Francisco. The company hopes that by using renewable energy, they will be doing their part to work against climate change. Read more.

What does it take to get the White House ready for the holidays? Apparently 92 volunteers, 4 days, and 150 pounds of gingerbread. As the Obama family celebrates their last Christmas season in the white house, First Lady Michelle Obama looks forward to welcoming others to view the extraordinary displays. “I’m thinking back to when we first came here to Washington and we promised to open up this house to as many people from as many backgrounds as possible,” Michelle Obama says. “We truly wanted to make the White House the ‘People’s House,’ particularly during the holiday seasons.” Read more.

Now that December is upon us, we are officially in the season of giving. Just ask the good folks who run Shish, a Muslim-owned, London-based restaurant. Shish has made it their mission to ensure that no one eats alone on Christmas day. The restaurant is offering free three-course meals to the elderly and the homeless to ensure that everyone has somewhere to be during the holiday. The restaurant is encouraging people to spread awareness of its campaign across social media. Read more.

Rich Nowakowski has a tough time speaking since he suffered from a stroke in 2012, but that doesn’t stop him from being the friendliest guy on the block. The construction crew across the street knew firsthand how friendly Rich was, as every day Rich sat on his porch and said hi to them and told them that they were doing great work. The crew wanted to do something special for Rich and knew he was a die-hard Packers fan. So, scrounging together some money, they surprised Rich with two Packers tickets, Packers gear, and $400 cash. Rich can’t speak much, but at least he could say, “Wow, wow, wow.” Read more.