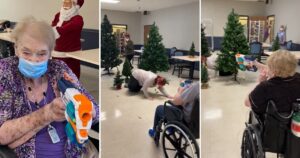 The sniping senior citizens of Blanchester, Ohio’s Continental Manor Nursing Home have gone viral in a makeshift hunting video that took the internet by storm, but not for the reasons you might think. Inspired by a similar video she saw online, Activity Director Lisa Beach transformed the communal dining room into a forest with faux Christmas trees and equipped the elderly residents with nerf guns. Beach and other staff at the Manor sported antlers and snouts as they snuck between the trees and dodged the nerf darts fired by the “hunters.” The festive game soon became an internet sensation, accruing over 30 million views within days of being posted on the Continental Manor’s official Facebook page. Beach remarked that her senior citizens felt like celebrities, and she even crafted “movie star signs” to hang on the doors of their rooms. Read more.

According to the Jewish tradition, a boy celebrates his bar mitzvah when he turns 13 to commemorate his entry into religious adulthood. The case was no different for 13-year-old Brody the labradoodle, the beloved pet of Reagan and Ethan Fink. The siblings simulated a typical bar mitzvah by dressing their beloved pooch in a blue and white yarmulke and prayer shawl, lifting him up on a chair, and dancing to traditional Jewish music. Brody was even treated with birthday biscuits and new squeaky toys. The video of the celebration made a big splash on TikTok and is still growing in popularity as viewers continue to fall in love with Brody. Congratulations! Read more. 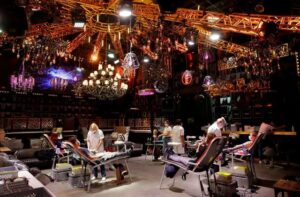 Dancefloor to Donation Center: The New Life of a Swiss Nightclub

When the MAD nightclub in the Swiss town of Lausanne was vacant for almost 10 months due to the coronavirus pandemic, club manager Igor Blaska decided to repurpose the popular nightlife hub into a center for donating blood. Old patrons of the club and newcomers alike now visit the giant warehouse to donate blood to those in need, all while music by famous artists like Queen and Michael Jackson livens up the scene. The venue offers a bit of solace to longtime visitors during the pandemic through its sense of familiarity and the fulfillment that comes with their donation. After almost 35 years of business for the MAD nightclub, Blaska remarked that he and his staff were “proud to organise any activity that was possible.” Read more.

With Thanksgiving looking a little different this year, a professor from University of Iowa wanted to help out. Because of travel restrictions, Professor Liz Pearce knew that students would be stuck at school on Thanksgiving. She and her three children decided to prepare and deliver home-cooked Thanksgiving meals to the students on campus. The professor sent out an email, and one of the students tweeted out a screenshot with the caption “My professor is absolutely too pure for this world.” Pearce’s daughter, who is vegetarian, even made a vegan menu for students with dietary restrictions. Talk about the best professor ever! Read more.

During their time at home, two Pennsylvania dads decided to have a cookie bake-off that grew into something beyond their wildest dreams. Since this April, 58-year-old Scott McKenzie and his buddy, 42-year-old Jeremy Uhrich, have been embroiled in what they termed, “the cookie wars.” What started as a joke “rivalry” to see who was the better baker led to 15,000 cookies sent to essential workers. Inspired to do more, the pair tweaked their two-man bake-off concept, transforming it into an initiative called Cookies for Caregivers. McKenzie and Uhrich posted on Facebook and were hopeful others would volunteer their time and baking expertise for essential workers. However, they never expected the enthusiastic response their idea received. After only a few days, the group membership topped 100 would-be cookie bakers! Read more.