The New York Public Library has created our new favorite challenge — #bookcoverdouble. As New Yorkers are staying at home and practicing social distancing, they are also recreating their favorite book covers. A few favorite covers so far are recreations of “Nancy Drew,” “Harry Potter,” and “The Handmaid’s Tale!” Want to participate but don’t know what cover to recreate? Try browsing covers on the NYPL’s e-reader app. Read more.

The Hives Are Alive, With the Sound of Music!

Have you ever heard music created by bees, for bees? Throughout the last 20 years, beekeeper and musician Bioni Samp has been making music with his bee hives. He uses the sounds that come out of his hive, and incorporates them into electronic music. Ultimately, Samp’s goal is to spread awareness about the dying population of bees through music. And while the music is mainly for humans, he of course plays it for the bees as well. When he performs his music, Samp keeps his identity hidden by wearing his bee keeper’s suit. It’s safe to say that the performances are creating a lot of buzz! Read more. 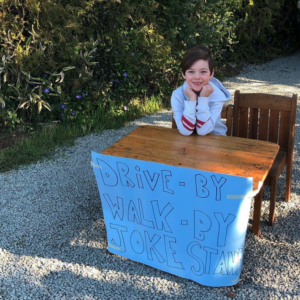 While most kids want to start their own lemonade stand, 6-year-old Callaghan McLaughlin had a different idea. He decided that people in his community needed some laughter now more than ever. So, Callaghan opened his own “Drive-by” joke stand! His mother said all his material is coming from a one-liner joke book that Callaghan absolutely loves. Each morning, he sets up his booth in front of his house. And even after a long lunch break, he returns for an afternoon shift. Callaghan’s joke stand has gotten a lot of love from his neighbors and community, but it’s also been featured on national news stations and gone viral on Twitter. Who doesn’t like a good laugh? Read more.

Like many people, Brenden and Jacqui Brown recently had to cancel their travel plans due to the Covid-19 pandemic. They had planned to travel to Las Vegas, Nevada for their 15th wedding anniversary, but ended up spending that time at home in quarantine. Their sons, however, wanted to make sure that they still had a special celebration. Eleven-year-old Jayden and 9-year-old Jentzen went to work transforming their dining room into a fancy restaurant for their parents. While it was not what they originally had in mind, this anniversary celebration was an exceptionally special celebration that they are sure to remember for years to come! Read more. 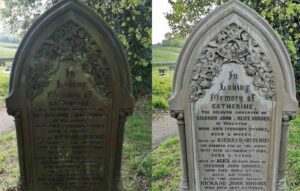 Ryan van Emmenis, a 37-year-old who owns his own cleaning company in Winsford, Cheshire, goes on a daily walk around his neighborhood. On those walks, he passes local graveyards. He was on Facebook one night when an idea struck him. He saw a photo his friend posted of their family member’s headstone. The headstone looked noticeably weather-worn and dirty, so Emmenis offered to clean up the stone for free. Since then, Emmenis and his three kids have been using their daily walks to clean neglected headstones in local cemeteries. Read more.

In the fall, a friend of mine picked me up to go on a drive. Spontaneous yet not uncommon, these mini road trips happen frequently…