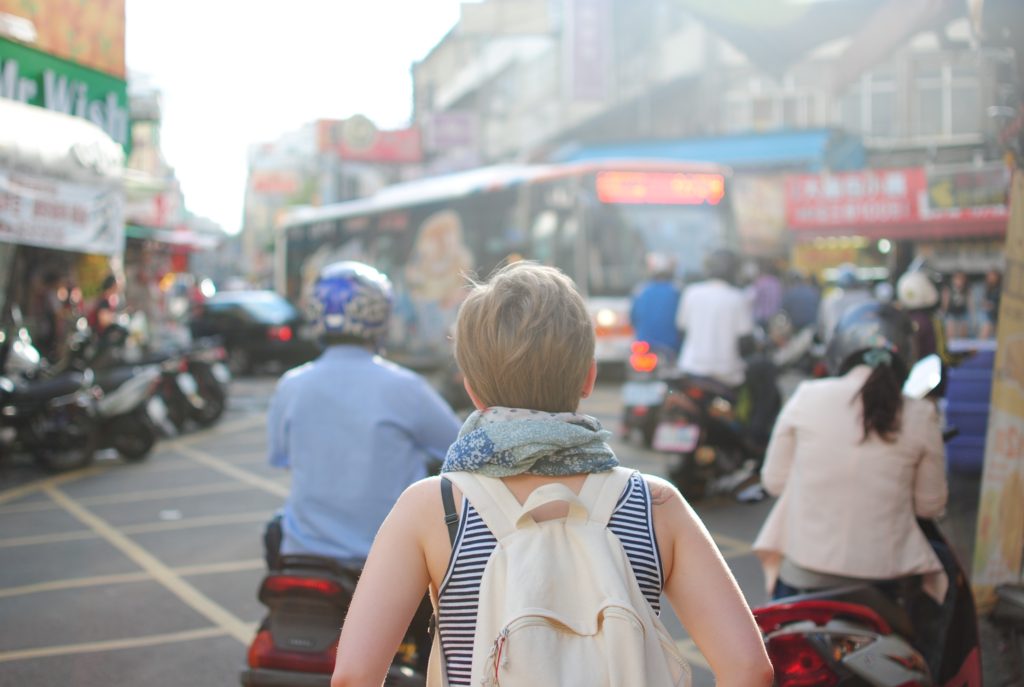 In five years, I’ve learned four languages to varying degrees. While teaching English in Thailand, I learned enough Thai to order food and talk about my job and the weather. Now that I’m living Spain, I’m learning a good amount of Spanish and a bit of the local language, Galician, and out of a yearning to dig deeper into my Filipino roots, I’m starting to learn Tagalog.

I’ve been living and teaching in Spain for two years. During my first four months living here, I had high expectations of myself and speaking Spanish. Having remembered a good chunk of my high school Spanish 10 years later, I expected that I could converse well enough to find an apartment, interact with coworkers at my job, or talk with a local smoothly.

Always a perfectionist, I wanted the words to come out flawlessly, as easily and articulately as they do when I speak English. I wanted my spoken Spanish to be precise and perfect, and when reality sunk in that my goal was impossible, my anxiety started to spiral out of control.

I hit a wall when I found myself alone in my dark apartment in a small Spanish village, crying on New Year’s Eve, unable to go out and try to socialize because I didn’t think I knew the language well enough.

On New Year’s Day, I decided to put an end to the self-pity and take action. I started with a simple study plan: Do a few grammar and vocabulary exercises for 10 minutes daily, and just try to speak, no matter how imperfect it sounded.

It was (and still is) a long and arduous process. But it’s no more arduous than sitting alone, trapped by my crippling perfectionism. As my practice continued, I slowly but surely learned to let go. I found that learning a language taught me so much more than just grammar and pronunciation.

Learning to be vulnerable

I’m an English teacher and a writer. Speaking and using English formally and articulately is my livelihood. I use poetry and creative writing to help me make sense of the world. In a foreign language, all of that is forfeited.

So, when I’m in the murky waters of trying to articulate an idea in a language that is not English, I have no choice but to trust. To trust the journey of learning a language, to trust the person I’m speaking with to be patient and kind, to trust that making mistakes is okay. Learning from them helps my progress.

How could I ever improve if I didn’t know what I was doing wrong? I have to be vulnerable every time I speak. I have to feel comfortable with not always sounding good or right. I have to find a way to laugh at myself and be okay when someone else does, too.

Listen carefully and admit when you don’t understand

Listening is complicated enough in English, but it becomes even more so in another language. In English, most of the time I’m just waiting to speak.

In another language, however, I must listen. And not passively. In order to reply correctly and continue the conversation, I have to defer concocting my response and start to really hear what the other person is saying.

Once, at the Madrid airport, the attendant checking boarding passes before security asked me a question as I was finishing my water and putting the bottle away. She’d asked quickly, and I didn’t catch everything she’d said. Too afraid to ask her to repeat herself, too afraid she’d discover that my Spanish wasn’t perfect and she’d switch to English (a real hit to my ego), I replied quickly, “Ah, vale,” or “Ah, okay.”

The attendant and her colleague erupted in laughter.

“Ya, me ha ententido perfectamente,” “You really understood me perfectly,” the attendant said. Then, in English, “Boarding pass, please.”

Later, I kept going through what she’d initially asked and realized she asked me “Qué ha guardado?” “What did you put away?” And I had responded “Ah, okay.”

It was then I learned to first slow down enough to listen. And if I don’t understand, I have to get over the ego-driven fear of not being right all the time. I have to admit that I don’t know everything and ask for help.

Remember: It’s not all about you

By listening and letting go, I’ve since improved my level of Spanish. I spend most of my day in the language, speaking with colleagues and friends about work, books I read, what my hometown is like. I’m working my way up to being able to talk more fluidly about denser topics like politics and the economy, and even trying to teach yoga in Spanish.

Now, I’ve begun a new adventure. From a desire I can only describe as a calling, I started learning Tagalog, the language my parents, aunts, and uncles speak when we’re all together.

One day, I’d like to go back to Manila and speak with my relatives in their own language and not expect them to speak English, a language they use in formal settings at school and at work.

Tagalog is playful. It’s expressive. My family makes more jokes and laughs louder when it’s spoken. When I speak it, however, my body is awkward and tense. I feel silly going over grammar exercises and dissecting it theoretically.

It’s about being open to the fact that I don’t always get it right, that learning a language is a long process, that making mistakes is not only okay, but good for me. I’ve learned, and continue to learn, that I have to stumble before I can get anything even close to being right. I have to let go. I have to be imperfect.

With every conversation I’ve had in a language other than English, I’ve learned that being imperfect is okay. And I begin to accept a little more of myself each time.