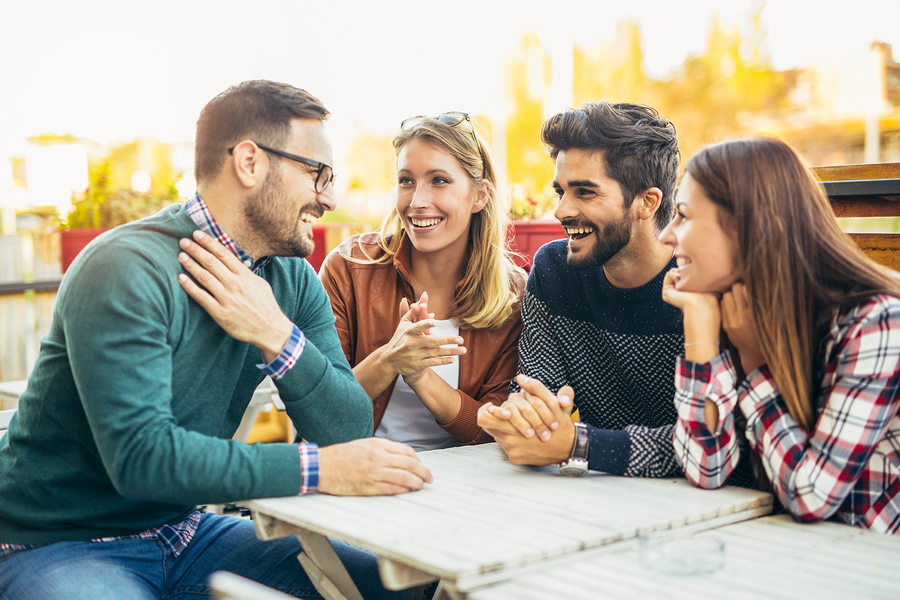 My boyfriend Adam and I landed in Florida with our airplane pillows still attached to our necks. It was so late that the usually busy airport was eerily quiet except for the sound of a stray traveler wheeling luggage. We were visiting our home state all the way from South Korea, where we taught English. And because our Airbnb wouldn’t be set up until the following day, we’d made plans with Adam’s best friend to crash at his place for the night.

After an Uber ride to our hometown, Adam and I tiptoed into his friend’s house, where he, his wife, and new twin babies were sleeping. We carefully set down our luggage and — holding our breath — switched on the air mattress pump. (I know. What were we thinking?)

The pump let out a thundering roar that echoed throughout the whole house. The sound of wailing twin babies followed. Woops.

That was the first time I met my BF’s BFF.

I might as well title that night, “How Not to Hit It Off With Your SO’s Friends.” I was dreading the next day. But after hanging out with Adam, his BFF, and a few other of his friends at a cafe, the pressure let up.

RELATED: What to Do When Your Date Strikes Out with Your Friends

“So, how did you manage to live to tell the tale of the air mattress debacle and still get invited to dinner parties?” You might ask. Here’s how:

Have you ever had a bad first date at a coffee shop because there was radio silence? Nowhere to start? Sometimes, meeting your SO’s friends is a bit like that.

To alleviate some of the awkward tension, plan a fun group activity. That way, there’s always something to talk about. Some more extreme examples of SO friend dates are visiting a theme park, going paint-balling, or attending a concert. Not long ago, Adam, some of his friends, and I went to an “Adult Night” at a children’s museum; we sipped on free craft brew while frolicking in the ball pit, climbing rope ladders, and battling in inflatable bumper balls.

But sometimes simple works just as well. My favorite time spent with my SO and his friends was playing a wholesome game of Pictionary. Most of the time we spent laughing at each other’s awful drawings and guesses, so there wasn’t any forced conversation.

Something about meeting people for the first time makes my mouth spin words out like one of those wind-up chattering teeth toys. It’s normal to be nervous, but you don’t want your SO’s friends to think you’re self-absorbed.

What’s helped me is to have some questions in the back of my head ready, such as, “How did you two meet?” Even if your SO has already told you the story, chances are their friend will be excited to tell it again. As a matter of fact, science says that’s because people love to talk about themselves. (So now I have an excuse.)

Another way to really hit if off with your SO’s friends is to follow up on those conversations the next time you meet with them. I really appreciate when Adam’s best friend does this to me. For example, if I say I’ve been working hard on a new story, the next time I see him, he might ask if the story’s been published. These follow-up questions make me feel special.

As I’ve gotten older, dinner parties have suddenly become a thing. And with every dinner party with my SO’s friends, there’s always a freak-out moment of, “What do I bring?!” While wine might be a traditional gift, I try to opt for something that’s a bit more personal — like homemade cookies, a small succulent, or a DIY candle.

If you’re meeting your SO’s friends for the first time at their home, any small gift will leave a lasting impression. If you’re meeting them somewhere else, such as a restaurant or even perhaps Adult Night at the children’s museum, gifts like the aforementioned might be a bit too much. Instead, offer to buy everyone a round of drinks, an appetizer, or another small token of appreciation for meeting up for the first time. Of course, buying things for your SO’s friends isn’t mandatory, but a small gesture can go a long way.

Your SO loves you not because you pick the best activities, you ask the most questions, or you buy the best gifts. Your SO loves you because you’re you! And his or her friends will, too. So, save your anxiety for something really worth stressing about — like, your taxes. Or whether you should get cold brew or nitro brew coffee.

Besides, your SO’s friends are probably equally nervous and more concerned with making a good impression on you. In fact, in an alternate Amendo universe, I bet there’s an article titled, “How to Hit It Off With Your Friend’s SO.”