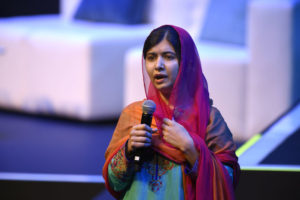 Exactly five years after being shot for advocating for girls’ rights to education, Malala Yousafzai attended her first class at the University of Oxford. The incoming freshman comes to campus with a wealth of experience, having spent years writing about living under Taliban rule, speaking out as a human rights activist, and even winning the Nobel Peace Prize when she was just 16. Malala plans to study philosophy, politics, and economics at the university. Read more.

A Cut Above the Rest

Six-year-old Wyatt Lafrenière suffers from both hyper- and hyposensitivity due to his autism. As you might imagine, this makes something like getting his hair cut not only uncomfortable, but also an anxiety-inducing experience. That is, it was until his mom, Fauve Lafrenière, found a barber willing to go to the extreme to make the experience bearable and even loveable. Franz Jacob, a barber at Authentischen Barbier in Québec, will often shut the door to the shop and minimize noise to keep the atmosphere calm. He even goes as far as to lie on the floor next to Wyatt to finish his haircut. Jacob’s become an internet sensation, and he’s one of many people starting the conversation about accommodating those with special needs in the everyday. Read more.

The Kindness of Strangers at a Cubs Game

Playoff fever has hit Chicago once again. And the good vibes have spread through the stands where earlier this week, two Cubs fans sitting in the bleachers helped an elderly couple – particularly an older gentleman struggling to walk – navigate the tricky seating and enjoy the game. Whenever the stadium would stand, the two fans helped the older man up as well. And at times, one of the fans would remain seated so that the couple had an easier time viewing the playoff game. Their acts of kindness allowed the couple to truly enjoy the baseball game. The older man remarked about the game: “I just love this!” Read more. 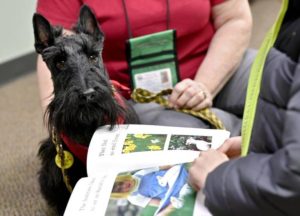 Who could possibly be a better audience than a gentle, furry friend? Meet Faolin the Scottish terrier, a therapy dog employed to help teach children struggling to read. He sits at Centre County Library in Bellefonte, Pennsylvania, to ease the stress of young kids who have a difficult time reading. His calm demeanour allows him to sit quietly next to the children, serving as a listener rather than a distraction. Even better, he entices children to read. One boy said he wanted to read at the library specifically because Faolin was there. Read more.

Seven-year-old Alex Ibarra collects soccer jerseys as a hobby, his prized possession being an American Outlaws Oakland team jersey signed by star soccer player Christian Pulisic. When Ibarra heard about the devastation in Puerto Rico caused by Hurricane Maria, he decided to put his cherished jersey to good use. He auctioned off the piece of memorabilia, raising more than $3,000 for hurricane relief efforts. Ibarra’s selflessness caught the attention of Pulisic, who in kind thanked him for his generosity, promising not only to donate to the relief effort himself, but also to send Ibarra another autographed jersey. Read more.