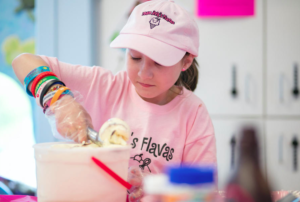 Sixth grader Ava Edwards is bringing joy to young cancer patients one scoop of ice cream at a time. In October 2013, Ava was diagnosed with chronic myelogenous leukemia, a form of cancer that is very rare. Months of her childhood were consumed by treatments and long stays in the hospital. After two years of being cancer free, her doctors can happily say that she is cured. But Ava hasn’t forgotten how arduous her hospital visits had been. With the help of her parents, Ava started the Ava’s Flavas organization, which brings weekly ice cream parties to children fighting cancer in the Baltimore area. Cookies and cream, fudge ripple, and Neapolitan are served alongside sweet toppings that bring smiles to patients and hope to parents. Read more.

The only thing worse than subway delays? Subway delays when you’re trying to make your college graduation. Jerich Alcantara was on his way to his commencement ceremony at Hunter College in New York City when it became apparent that major delays on the E line were going to make him miss the graduation. When passengers on the train became aware of what was happening to the nursing school student, they decided to throw him an impromptu graduation. Many of the attendees of the ragtag ceremony posted footage on Twitter, which went viral. Don’t worry, Green Day’s “Good Riddance” was played, which makes it a totally complete graduation party. Read more.

Mowing Grass for Those in Need

Rodney Smith Jr. is changing the world, one lawn at a time. Smith Jr., who has decided to mow grass in all 50 states, just made his most recent stop in Kansas City. Originally from Alabama, Smith Jr. is traveling cross country to mow lawns with his organization that works with single mothers, veterans, and older Americans. He was inspired to begin his work after seeing an older man in his neighborhood struggling to cut his lawn. Why did he decide to engage on such a mission? “A small idea can change the world. I’m just cutting grass, I’m able, I’m able to help someone who’s not able.” Read more.

Kindness of a Stranger Reunites Soldier with Family 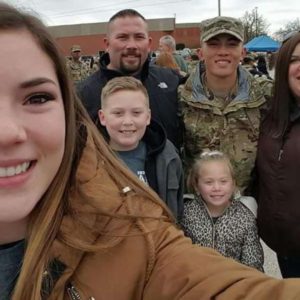 After his first eight months in the United States army, Keaton Tilson saw the chances of reuniting with his family for Memorial Day weekend slipping through his fingers. The approval to leave his station in Fort Hood, Texas, and return home came later than expected. Unable to book a flight home in advance, he spent the night sleeping in the airport and planned on buying a standby ticket first thing in the morning. Shortly after he called to tell his mother that flight delays made the prospects of returning home  bleak, a stranger approached him, having overheard his predicament. Later identified as Josh Rainey, this stranger offered to pay for a $375 ticket for Tilson’s ticket back home and make the family reunion possible. Read more.

Another day, another GoFundMe page that will make you want to tear up. Seattle dad Jeffrey Law was disturbed by the treatment of underprivileged children by Seattle’s public schools. After seeing a story about kids being denied food and “singled-out with stamps or wrist bands” when they could not afford lunch, Law knew he had to do something to help. So, he started a GoFundMe page to help collect money to pay students’ lunch debts. The page has raised more than $40,000 so far. The aim is to reach a total of $50,000 by the end of June, and with public donations from celebrities like John Legend, Law is hopeful they’re reach that goal. Read more.