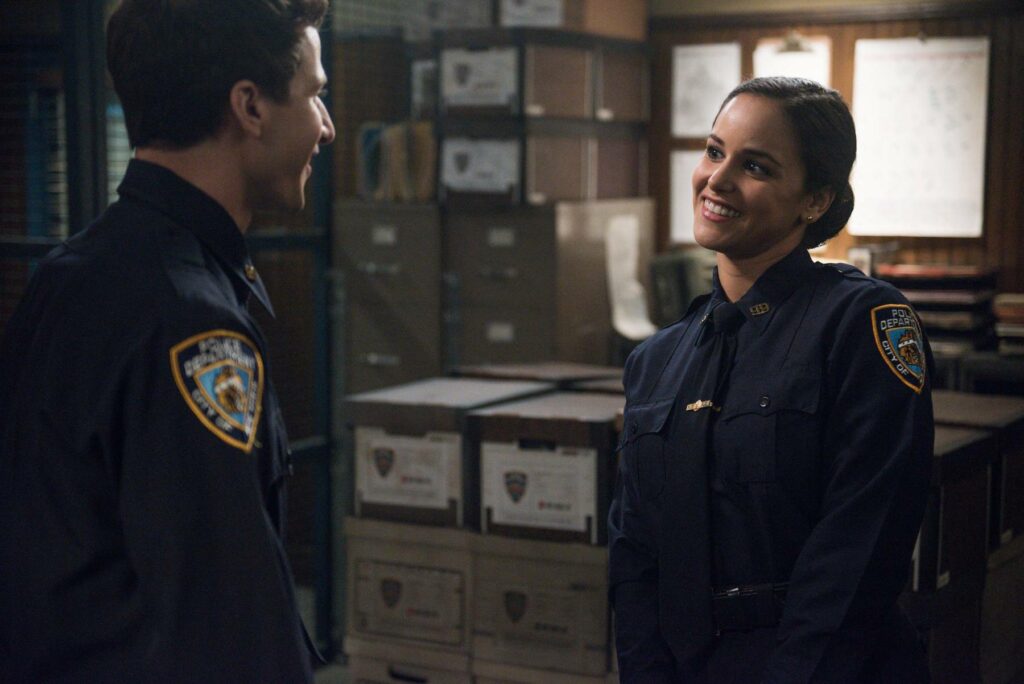 In college, I was clueless about two things: what to look for in a boyfriend, and how to be a good romantic partner. I was quick to point out any character flaw in the guys I dated, but I expected them to accept everything about me with no judgment. I was uncommunicative and, let’s face it, selfish.

Back then, I didn’t watch shows that were overflowing with examples of healthy relationships. Then, along came “Brooklyn 99,” and I wish I’d had Amy Santiago and Jake Peralta as an example back in college. These two detectives have taught me valuable lessons about how to find and become a strong romantic partner.

1. Be respectful about how we pursue people

First, Jake tells Amy he likes her romantically prior to going undercover. (Okay, his timing wasn’t super mature, but stay with me here.) Upon his return, Jake lies to Amy about being into her in an attempt to avoid making her uncomfortable. He later comes clean about his feelings, believing Amy deserves to know the truth.

After initially pursuing her, Jake backs off when Amy mentions she no longer wants to date cops. He expresses his disappointment but doesn’t push further.

In contrast, several of my male friends have vowed to be persistent in pursuing a love interest after being rejected. They’ve committed to waiting until she changes her mind or promised to try again in a few weeks.

Throughout the process, Jake isn’t blinded by his own desires to be with Amy. Any time he communicates with her about his feelings, he thinks about what she wants. Jake sets a strong example for how to pursue someone with their best interest in mind, ahead of our own.

2. Gender rules are meant to be broken

When Amy and Jake eventually get together, one of my favorite aspects of their relationship is how they defy gender stereotypes.

In Season 4, Amy’s afraid to take the sergeant’s exam even though becoming a sergeant has been her lifelong dream. She’s nervous that becoming Jake’s boss will mess up their relationship.

Jake convinces her to take the exam. He says, “This is your dream, from before we were dating. And yeah, things might change a little, but for the better, right?” Jake’s masculinity doesn’t take a hit from realizing his girlfriend might become his boss or earn more money than him.

One of my favorite things about my husband is that he doesn’t project gender-specific expectations on me. We’re a team, but we don’t stick to gender-defined roles. Yes, I always do the laundry, but he loves to cook. After kissing a few frogs, I’m grateful I’m with someone who isn’t threatened by my ambitions.

Jake and Amy’s relationship is a prime example of the old saying, “Opposites attract.” How do these opposites make their relationship work? They communicate. They lightheartedly discuss each other’s flaws, from Amy’s FOMOW (Fear of Missing Out on Work) to Jake’s oblivion about renter’s insurance. They fight about Jake prioritizing Amy’s needs enough to buy a new mattress and about whether or not to have kids.

How many of our relationship problems can be attributed to a lack of communication? Fights don’t have to result in hurt feelings — they can become tools for growing. My husband and I used to fight about the amount of time he spent playing computer games. I wanted him to spend more time with me, and he felt like I judged his hobbies. After duking it out in several arguments, he learned to be more cognizant of how his actions affect me, and I realized that I should be less critical of how he spends his free time.

Yes, Amy and Jake communicate, but it’s still baffling that two vastly different people end up together. They’re an interracial couple whose upbringings couldn’t have been more different. Jake is an only child who watched his parents suffer from a rocky divorce. Amy is one of eight children whose parents are still married. Jake is obsessed with “Die Hard,” while Amy focuses her energy on organizing and reading.

Though they’re in uncharted territory, they support each other when their families let them down, like when Jake’s mom gets back together with his deadbeat dad, or when Amy’s mother shows more love to her brother than to her. Jake starts reading the “Harry Potter” series because Amy loves it, and Amy ends up caring enough about “Die Hard” to declare that William Atherton is the second-best villain of the series.

I used to mock my husband’s love of baseball. Now, I’ve learned to love it, and watching it is one more way for us to spend time together. I used to have to pester my husband to hike with me, but now he talks about saving up vacation days for a backpacking trip. I’ll never love computer games, and he’ll never watch “Friends.” But we’ve found interests we can bond over.