For most of my life, I’ve disliked being single. I remember reading “Anne of Green Gables” at age 7, sighing and looking forward to the day that I would meet my own Gilbert Blythe. Several times, I thought it had happened. Most recently, about a year and a half ago, I had secured a rented room and a job in a new city, planning to move closer to my long-distance boyfriend in Portland, seven hours away.

But I would have to wait for Gilbert a little longer. My beau broke up with me 12 hours before I had planned to pack everything into my car and relocate my life. While every breakup has challenges, this one had further reaching consequences than any I’d previously weathered. I had quit the flexible part-time job in social services I used to supplement my freelance income, and I’d chosen not to sign another lease on my lovely house with the sunny kitchen, moving in with my parents for a couple of weeks until the big move. In the space of a moment, everything in my life changed.

I thought about getting in my car anyway, starting my brand new job, and moving all of my stuff into the tiny basement room in a house with four other people. But I realized that I’d never loved the idea of living in Portland, even though I’d tried to convince myself otherwise. I loved the idea of being in the same city with someone I loved. A few hours north, in Washington State, there were many people who loved me (plus, I knew where all the grocery stores were). I decided to stay, at least for the time being.

At first, I could feel only grief and disappointment. But in time I realized that I had an incredible opportunity. I’ve always been measured and careful with my decisions, not quitting a job without another one lined up, always looking before leaping. I’d thought that was what I was doing this time. Instead, I’d stumbled into uncharted territory: no job, no lease. I began to think: What do I want my life to look like?

After years on the fence, I decided to make a go of a freelance writing career. The savings I had thought would provide a cushion for a move to a new city did the same for a jump to a new career. After a few months of freelancing, I applied for an MFA program, following a dream I’d barely glanced at while I focused on meeting or dating a significant other.

Beyond work and education, I began to rekindle the friendships I’d neglected while dating and then planning to move. In the days after the breakup, I reached out to my friends, and they reached back. I discovered treasures, people already in my life.

How to be single in the world

Last fall, I read Heather Havrilesky’s “How to Be a Person in the World.” It’s a collection of her “Ask Polly” columns on a variety of subjects, many of them written to single people. There is a common thread that I noticed in several answers to people who are concerned about being single, who wish to meet someone, who are concerned that they never will.

“What will make ALONE look good to you?” Havrilesky asks one reader. “You have to work on that. Because single life needs to look really, really, good. You have to believe in it if you’re going to hold out for that rare guy who makes you feel like all of your ideas start rapidly expanding and approaching infinity when you talk to him. You need to have a vision of life alone, stretching into the future, and you need to think about how to make that vision rich and full and pretty. You have to put on an artist’s mind-set and get creative and paint a portrait of yourself alone that’s breathtaking. You have to bring the full force of who you are and what you love to that project.”

As I read those words and the others like them in Havrilesky’s book, I realized that I had been following her advice without knowing it, ever since my breakup. Somewhere along the way, I had realized that my life now didn’t include a significant other, but that I still wanted it to feel good on the inside.

It’s not surprising that Havrilesky is writing many of her letters to single people. In 2015, Gallup found that singleness has increased for those between the ages of 18 and 29 by about a quarter between 2004 and 2014, 64% of that demographic is single. According to the Bureau of Labor Statistics, just over half of the American population was single in 2014. Although a high percentage of unmarried people would like to get married, median age for a first marriage is the highest it has ever been, 27 for women and 29 for men. Those numbers continue to rise. Sometimes, I feel like I’m the only single person I know, but there are many of us.

It’s easy to think that a “good life” needs to be full of intrigue, excitement, and glamour, especially when you’re single. While I wanted my life to be lovely, I also wanted to resist the pressure to appear fabulous.

I became familiar with Sara Eckel’s work on singleness through an essay she wrote called “Stop Telling Single Women They’re Fabulous.” Both that essay and her book, “It’s Not You: 27 (Wrong) Reasons You’re Single,” helped me to take a deep breath in the midst of my worry about being single. I reached out to her, curious about the ways she relaxed into her singleness.

“Part of having a good life as a single person is making space for the fact that it’s not always easy, and giving that dignity as opposed to it being something that you have to be ashamed of,” she says. “Every human situation is going to be hard sometimes.”

Over the years, I’ve heard a lot of advice on shedding my single status, most of them from married people. “You’re too picky,” “You need to put yourself out there more,” and “You care about this too much, it will happen when you’re not looking for it,” chief among them. Often, I love and respect the people saying these things, but it’s hard not to feel like I’m not allowed to feel negative emotions in front of them. Still, as I began to open my eyes to relationships and small, beautiful things already present in my life, like my tidy, light blue bedroom with the wood floors, the ability to meet a friend on the spur of the moment, or the way a friend is training her daughter to call me “Auntie Gravity,” I began to see what they might mean.

“I was talking to a woman who said ‘you know the only thing I regret about my single years is all the time I spent worrying about it,’” Eckel says.

It’s difficult to appreciate the wide swathes of time alone when you’re feeling lonely, but these days, I’m embracing time to read, sleep in, or pursue something creative. I can’t flip a switch and stop worrying, but with therapy and being intentional about believing Eckel and Havrilesky’s words (among others), I’ve managed to convince myself that it’s going to be okay.

On the days when I’m less than satisfied with my single status, it can be hard to appreciate the opportunities my singleness brings. But when I’m paying attention, I’m constantly reminded that these days are a gift. “I think the time that you have when you’re single, and especially when you’re single and a grown up, which not everybody gets, can be quite precious,” Eckel says. Although she’s been married for awhile, she told me that there are some parts of her single life (like a weekend to herself to work on a project) that she is only now appreciating. It’s so easy for me to appreciate experiences and opportunities only after they’ve passed, but in this case, I’m trying to notice when my favorite deli has a cheese sale with samples, or a friend calls just to chat, or when the moon is completely, glowingly full. I want to catch all the beautiful moments I can as they go by. 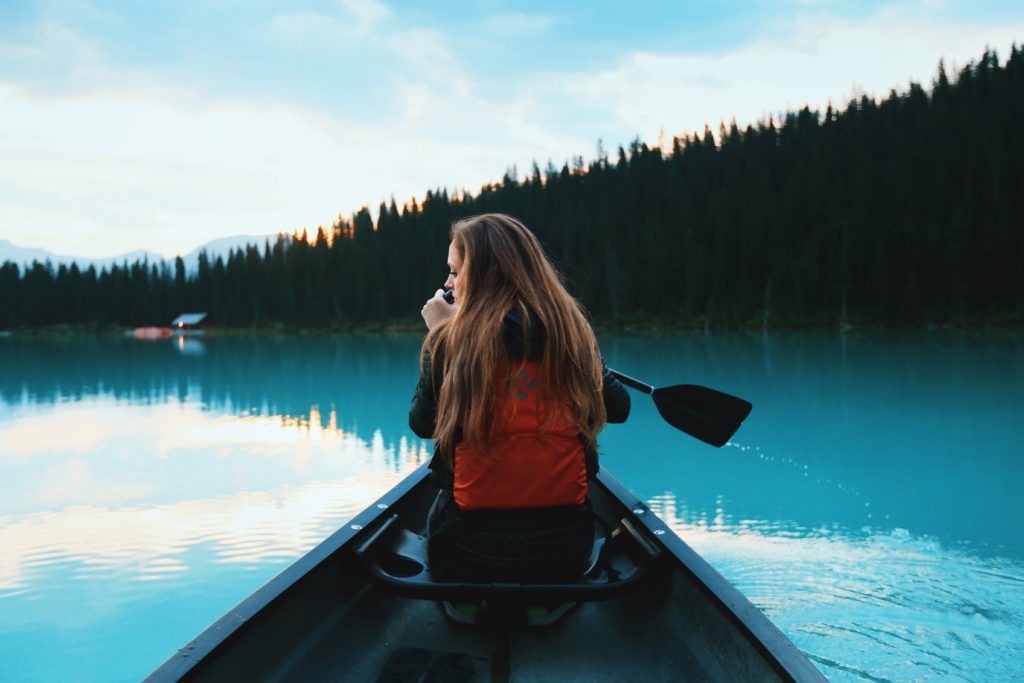 Choose your own adventurous life

Another element of the “fabulous single life” is the constant pressure to “put yourself out there.” Over the years I’ve gone to countless events I didn’t want to attend, just because I might meet someone there. I have met a lot of people, most of them wonderful women who have become good friends. I’m not sorry I’ve been socially active, but I’m learning to accept invitations because I want to go, take classes because the topic interests me, and do the sort of things I’d want to be doing anyway, whether or not I had a significant other. I’m also learning to say no when I want to and to enjoy my own excellent company. Eckel had a similar experience.

“I was very focused on yoga, meditation, traveling, throwing parties,” she says. “I did all this stuff, and I did love it, but there was also something in the back of my head: ‘Well, I’m doing this so I can be this fantastic person so that then I can have a relationship.’ It’s almost like [I was] being this fabulous single woman so that I [could] stop being a single woman. At a certain point, I stopped that. I said ‘You know what? This is just what is, and I’m going to relax and enjoy what life has given me, and what opportunities I have, and let the future be what it is.”

I found by giving up my perception of control, I became less frustrated with the outcome (which had never been in my control anyway).

“Meeting this person is such a bizarre variable,” Eckel says. “You can go on a million Tinder dates and not meet anybody, and then you can do something completely arbitrary and meet somebody.”

The more I talk honestly with people, the easier it is to see that most of us are hoping for things we don’t have. I have friends hoping for children, or new jobs, or the opportunity to pursue a creative dream. It’s easy for me to look around and think that my coupled friends have it better than I do, that they have the best life, and I am only the runner-up. But it’s not true.

Now, I think back to that little 7-year-old I used to be, and I wish I could tell her some of what I’ve learned. I wish I could share that version of myself who was crushed by her breakup — that in breaking her heart open, it would become far more spacious. That she wouldn’t be afraid to try things that seemed hard, like jumping into an unstable career or applying for a competitive MFA program, because what she thought was the worst had happened, and she had survived to be stronger than she’d been before. No matter what, I want to tell her, you are enough, and you are loved.